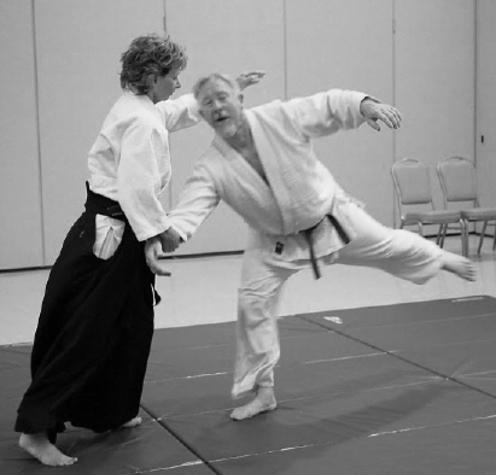 Aikido is a defensive martial art. This means that we learn to defend ourselves without the intent to harm our attacker – without a fighting mind.

Our natural human reaction when attacked is fight or flight. Aikido students condition themselves to stay calm when threatened so they can choose other options.

When attacked, we move with the attacker to unbalance him, take control, and use his momentum to create a technique. We call this blending – accepting the attack. We are specifically learning NOT to fight. For this reason we do not compete. We do enjoy practicing with other aikido groups at seminars.

Aikido was developed by Moreihei Ueshiba (1883-1969), known to the aikido world as Osensei, meaning “great teacher”. He was an accomplished martial artist, and also a spiritual man who in midlife had a revelation that he wanted to practice his art in a more compassionate way.

Aikido is a modern art that is still developing.

As an affiliate of the Aikido Association of America, Mountain Path Aikido continues the legacy of Fumio Toyoda Shihan, the AAA's founder, as instructed by James Nakayama Shihandai, Shibucho (leader) of the AAA's Western Region.